M. Pifferi, The Limits of Criminological Positivism. The Movement for Criminal Law Reform in the West, 1870-1940 (Abingdon: Routledge, 2022) 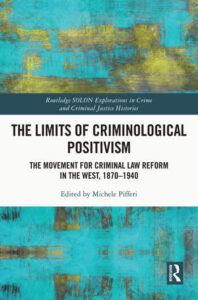 The Limits of Criminological Positivism: The Movement for Criminal Law Reform in the West, 1870-1940 presents the first major study of the limits of criminological positivism in the West and establishes the subject as a field of interest.

The volume will explore those limits and bring to life the resulting doctrinal, procedural, and institutional compromises of the early twentieth century that might be said to have defined modern criminal justice administration. The book examines the topic not only in North America and western Europe, with essays on Italy, Germany, France, Spain, the United Kingdom, Belgium, and Finland but also the reception and implementation of positivist ideas in Brazil. In doing so, it explores three comparative elements: (1) the differing national experiences within the civil law world; (2) differences and similarities between civil law and common law regimes; and (3) some differences between the two leading common-law countries. It interrogates many key aspects of current penal systems, such as the impact of extra-legal scientific knowledge on criminal law, preventive detention, the ‘dual-track’ system with both traditional punishment and novel measures of security, the assessment of offenders’ dangerousness, juvenile justice, and the indeterminate sentence. As a result, this study contributes to a critical understanding of some inherent contradictions characterizing criminal justice in contemporary western societies.

Written in a straight-forward and direct manner, this volume will be of great interest to academics and students researching historical criminology, philosophy, political science, and legal history.

This website uses cookies to improve your experience while you navigate through the website. Out of these cookies, the cookies that are categorized as necessary are stored on your browser as they are essential for the working of basic functionalities of the website. We also use third-party cookies that help us analyze and understand how you use this website. These cookies will be stored in your browser only with your consent. You also have the option to opt-out of these cookies. But opting out of some of these cookies may have an effect on your browsing experience.
Necessary Sempre abilitato
Necessary cookies are absolutely essential for the website to function properly. This category only includes cookies that ensures basic functionalities and security features of the website. These cookies do not store any personal information.
Non-necessary
Any cookies that may not be particularly necessary for the website to function and is used specifically to collect user personal data via analytics, ads, other embedded contents are termed as non-necessary cookies. It is mandatory to procure user consent prior to running these cookies on your website.
ACCETTA E SALVA