Daniela L. Caglioti, War and Citizenship. Enemy Aliens and National Belonging from the French revolution to the First World War 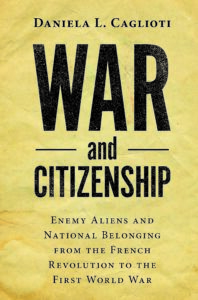 What did it mean to be an alien, and in particular an enemy alien, in the interstate conflicts that occurred over the nineteenth century and that climaxed in the First World War? In this study, Daniela L. Caglioti highlights the many ways in which belligerent countries throughout the world mobilized populations along the member/non-member divide, redefined inclusion and exclusion, and refashioned notions and practices of citizenship. She examines what it meant to be an alien in wartime, how the treatment of aliens in wartime interfered with sovereignty and the rule of law, and how that treatment affected population policies, individual and human rights, and conceptions of belonging. Concentrating on the gulf between citizens and foreigners and on the dilemma of balancing rights and security in wartime, Caglioti highlights how each country, regardless of its political system, chose national security even if this meant reducing freedom, discriminating between citizens and non-citizens and violating international law.

Any cookies that may not be particularly necessary for the website to function and is used specifically to collect user personal data via analytics, ads, other embedded contents are termed as non-necessary cookies. It is mandatory to procure user consent prior to running these cookies on your website.